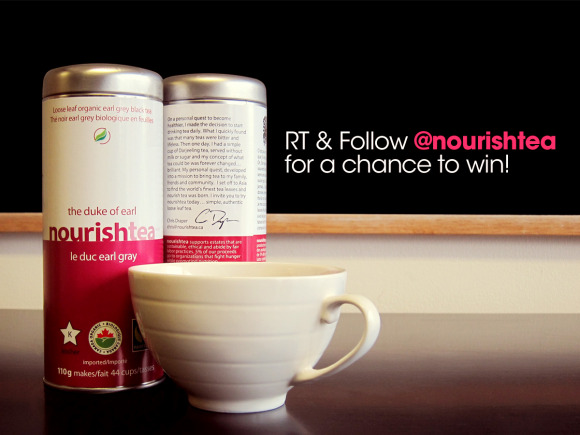 We’re giving away two tins of our very own Duke of Earl! This black tea is a crowd pleaser and has a rich aroma of Italian bergamot that Earl Grey fans love.

UPDATE: Thanks to everyone to joined, and congrats to @ItsDonnaG for winning our contest! Stay tuned for our next tea giveaway!

This promotion is in no way sponsored, endorsed or administered by, or associated with, Twitter. We hereby release Twitter of any liability. To enter the competition, you must be: (a) a Canadian resident; (b) the age of majority in your Province; (c) follow @nourishtea on Twitter and (d) retweet one of the qualifying tweets. No purchase necessary. The closing date is February 4 at 11:59PM EST. The draw will take place on February 5. Prize is not exchangeable for cash or any other prize. Incorrectly completed entries will be disqualified. Winner will be contacted after the giveaway ends.